New Private Markets
Home News & Analysis Investors Cryptocurrency may not be ESG compliant, but its moment is yet to...
Return to search 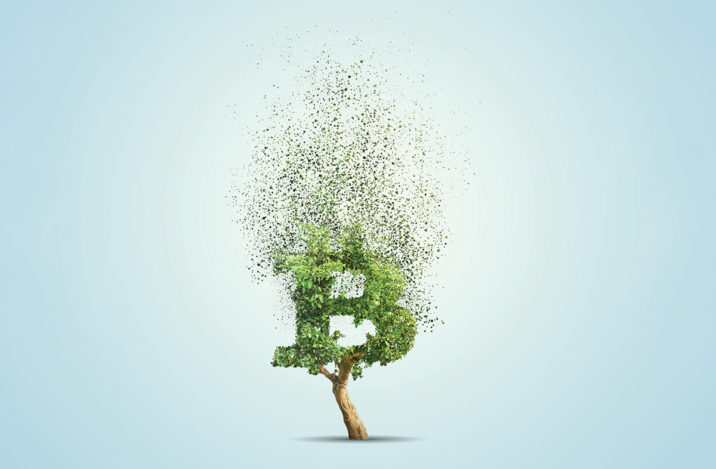 Cryptocurrencies have developed a reputation as big consumers of energy and damaging to the environment, making some question if investing in crypto start-ups means not meeting environmental, social and governance standards.

Bitcoin is not yet ESG compliant, especially on the environmental side. But investors are gambling on the possibility that cryptocurrencies and blockchain technology are well on their way to becoming more ecologically friendly.

And now, many of these same investors are pushing the industry to adopt practices to reduce their environmental impact. But first, investors want to clarify that bitcoin and crypto are not the most destructive of polluters that critics might make them out to be.

Matthew Le Merle, co-founder and managing partner of Fifth Era and Keiretsu Capital, says the first thing any investor needs to know is that all industries affect the planet. Keiretsu set up a blockchain fund that invests in other venture funds.

He points to the technology and financial industry, which runs large data centres that consume large amounts of electricity to keep the servers up and running.

Le Merle adds that cryptocurrency happened to come up as a talking point for ESG just as people started to focus more on climate tech and saving the planet. And he says that everyone should do their part on reducing their carbon footprint.

However, Le Merle and other crypto investors agree that bitcoin uses a lot of energy.

How crypto measures up

Data from the Cambridge Bitcoin Electricity Consumption Index estimated bitcoin mining uses 112.57 terawatt-hours of electricity per year. In comparison, the Netherlands consumes 110.68 TWh of electricity annually. In addition, because it consumes such large amounts of energy, bitcoin mining is prevalent in countries where electricity is cheap and abundant. Often, this means power is sourced from coal-powered plants rather than renewable energy sources, which are typically more expensive to harness.

But bitcoin is not the only cryptocurrency, nor is it the standard. Ethereum, another popular protocol and blockchain framework, also uses the proof-of-work model, which requires miners to solve many complex mathematical problems faster than other miners to verify transactions. This tends to require more computational power and electricity.

Many investors consider bitcoin’s environmental impact as a non-starter, especially if they have ESG metrics standards to follow.

David Sneyd, analyst and vice-president of responsible investment at BMO Global Asset Management, said in a blog post they consider bitcoin and other cryptocurrencies a “net negative from an ESG standpoint”.

“As it currently stands, the positive potential of bitcoin remains unproven, but the negatives are very real and present,” Sneyd said.

He added that blockchain “has a lot more promise at providing solutions to long-standing ESG problems”, such as supply chain traceability and renewable energy distribution.

Investing in blockchain and cryptocurrencies does not automatically mean an investment in bitcoin. However, it is hard to separate the two. For some, companies enabling crypto or using its technology can make these firms complicit.

David Forsberg, managing partner of Ascent Energy Ventures, says that even if such companies as Coinbase do not personally mine bitcoin and other cryptocurrencies, they should still be held to the same standards as other industries when people use their end products and pollute.

“People hold ExxonMobile and the like accountable for Scope 3 emissions, which is us driving around in our cars,” Forsberg says. “Why is it that we allow Coinbase and others to be so distant from the nefarious actions and environmental consequences of bitcoin/crypto? Why don’t we hold them accountable to the same ESG standards?”

Cryptocurrencies such as bitcoin saw strong performance in the past year. With the public debut of cryptocurrency exchange Coinbase in April, many believed crypto was moving into the mainstream after years of staying in niche trading circles. Coinbase was backed by several VCs, including Ribbit Capital, Union Square Ventures, IVP, DFJ Growth and Andreessen Horowitz.

But not everyone rode the Coinbase train. More funds have entered crypto through the blockchain.

All about the blockchain

Most venture funds are more interested in blockchain technology, which is underpinning all cryptocurrencies and most digital tokens, rather than investing in coins. Blockchain is a decentralised ledger where all participants in the chain have transparency on all points of the transaction. Participants access it with unique cryptographic keys and it is immutable, meaning it cannot be edited or changed.

Start-ups have found ways to utilise blockchain in varied ways, from tracking shipping to recording all financial deals in the Australian Stock Exchange. Many crypto-related projects, such as the popular non-fungible tokens, or NFTs, rely on a blockchain.

“It’s not a play on if bitcoin is going to be the cryptocurrency of choice or replace the dollar or anything like that. Think about it as a technology play in and of itself, that it’s just a network. Think of it as a venture capital holding in the concept of digital currencies,” Spellar says. “And that’s the way that we view it. I don’t have a fundamental view on bitcoin, but I have a fundamental view on the digitisation of assets.”

The Fairfax County ERS invested $10 million into Morgan Creek’s $42 million fund in 2019. It then made a follow-on investment of $38 million. Spellar says that made them investors in Coinbase and cryptocurrency banking platform BlockFi.

Spellar says he understands it’s a controversial space, but he compares investing in blockchain and crypto to investing in a venture fund. He says it’s a bid to support a new and developing technology, which is how he sold the investment to the board of Fairfax County’s retirement system.

Other cryptocurrencies began searching for ways to curb costs related to electricity consumption and in the process, move to more energy-efficient models as bitcoin’s power guzzling gained a reputation.

However, proof-of-stake does not have the same security as proof-of-work.

With this in mind, venture capital is trying to get the industry more aligned with protecting the environment and hoping that the technology progresses to a point where they can claim crypto and blockchain as meeting ESG standards.

Garrou, Le Merle and others point out that the crypto industry is already incentivised to use less energy because using less electricity means a lower cost to mine coins. And as the technology improves, so will its energy usage.

The industry created different organisations to push for more renewable energy usage or offer carbon offsets tokens. Blockchain developer Energy Web, RMI, and the Alliance for Innovative Regulation established the Crypto Climate Accord, an initiative to decarbonise the cryptocurrency industry by 2030.

Companies that sign on to the accord promise to commit to net-zero carbon emissions by that date. More than 45 companies in crypto, finance, technology and energy have signed on to the accord.

The platform will eliminate dependence on self-reporting renewable energy sourcing and bring transparency to the process, according to Energy Web.

“Net-zero emissions is not as good as being low energy usage. But it’s the next best thing,” says Keiretsu’s Le Merle, who also serves as chairman for the Universal Protocol Alliance. “This is the way the world’s biggest companies and governments currently deal with their energy footprints, as they’re expected to offset them by buying and retiring carbon credits, and so we did that for bitcoin.”

Much as the crypto industry is working on decarbonising itself, VCs are also slowly introducing ESG concepts to their LPs. Many VCs are also choosing to focus on the future good of blockchain, and cryptocurrencies, therefore meeting the social aspect of ESG.

Not just E in ESG

Mercury Fund’s Garrou says his firm’s focus is on finding start-ups which align with meeting the UN’s sustainable development goals. These include eradicating poverty, achieving gender equality, access to clean water and sanitation and affordable and clean energy. Garrou says his firm’s investment in Topl fits into that mold.

“One of the core values of our company is that we want to do deals that do good,” he says. “Some of these deals may have an ethical aspect, and some may have a sustainability aspect. But we don’t have an ESG bent; we think ESG and inclusion, in general, will be woven into every asset manager in the future.”

Garrou adds that he hadn’t introduced his LPs to their more sustainable and impact investing strategy as the firm raised its last fund about three years ago, but says this new focus was “lit on fire” by the pandemic. Their fifth fund will mark the first time they talk about that new plan.

Jalak Jobanputra, founding partner of Future Perfect Ventures, says she first became interested in crypto due to its early promise of expanding access to finance. She believes blockchain can do much social good. For her, the technology is still so new and constantly evolving, so it will take time to decarbonise.

Still, some investors firmly believe anything related to bitcoin will fail an ESG test. For Ascent Energy’s Forsberg, anyone claiming cryptocurrency or other related technologies as ESG-friendly is naïve at best or hypocritical at worst.

“I think there’s value to blockchain, so I’m not dismissing the technology. Just don’t claim cryptocurrency, blockchain or mining is ESG. It consumes huge amounts of energy,” Forsberg says.

And yet, current blockchain stakeholders are holding fast and waiting until the industry decarbonises. But that’s far into the future and greatly depends on the industry itself, and if it’s willing to source more renewable energy and abandon electricity-hungry models.