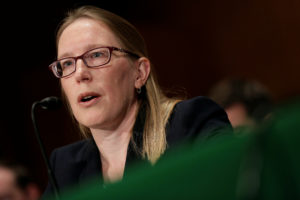 The Department of Labor has quietly updated ERISA rules to require private pension plan fiduciaries to put financial returns ahead of sustainable goals in investing, a last-minute blow to so-called ESG investing.

For private equity firms, the new rules are two steps back from June, when Labor officials announced that pension fiduciaries could consider alternatives as part of a balanced risk approach. It potentially opened up a $7 trillion market. Now, though, Labor is clamping down on a growing ESG movement. Seven-hundred private equity firms have already signed onto to the UK’s Principles of Responsible Investing accord.

“The Department has construed the requirements that a fiduciary act solely in the interest of, and for the exclusive purpose of providing benefits to, participants and beneficiaries as prohibiting a fiduciary from subordinating the interests of participants and beneficiaries in their retirement income to unrelated objectives,” the DOL said in its new rulemaking, published October 30.

The new rules had been expected but came over opposition from many investment advisors and their advocates. Ethical, sustainable and governance models of investing have slowly become a Washington issue that breaks more-or-less cleanly along partisan lines: Democrats say regulators should encourage more of it, while Republicans say they’re worried that it has become a marketing meme with little relation to investor, or even sustainability, needs.

“Asset managers who do not have to explain what they mean by using terms like ‘ESG’ and ‘sustainable’ can get a bit loosey-goosey with those terms,” commissioner Hester Peirce said in a September 17 speech before an audience at Harvard Law School.

Investment advisors are caught in the middle here: the investing public doesn’t see ESG as a partisan issue so much as a risk issue and they’re demanding a lot more of it from their advisors. IA advocates can at least claim a moral victory: “ESG” doesn’t appear anywhere in the actual text of the 148-page amendments (although it’s spread throughout the preamble). Regulators also stepped back from a broadly-worded requirement that fiduciaries compare investment strategies; now, they’re only required to canvas “reasonably available” investment strategies “with similar risks.”

IA clients have made clear that the “bottom line” is more than just dollars in versus dollars out but also a larger sense of social responsibility, what some have called “stakeholder capitalism.” But the C-suite, broadly, views ESG as another attempt by activist shareholders to wrest control of companies from executives and have fought fiercely against ESG measures.

The DOL’s rules won’t take effect until 60 days after they’ve been posted to the Federal Register. They’re also subject to the Congressional Review Act.

The SEC has promised to examine ESG labels this fiscal year. At a panel discussion on October 29, Asset Management Division co-Director Adam Aderton said he expected early enforcement actions to focus on disclosure. The goal is to keep advisors from “greenwashing” investments — masquerading as environmentally sound when they’re not.

But the commission has divided on ESG matters, too. For instance, its September 23 decision to raise the ownership threshold for shareholder proposals quickly became a debate over whether, and how, to regulate ESG labels.

Officially, proponents of the measures say they’re “modernizing” an arcane process and saving companies from wasteful battles with abusive activist investors. But Democratic commissioner Allison Herren Lee said they were aimed squarely at the growing ESG movement. There have long been battles over executive compensation, board leadership and political spending at shareholders’ meetings, but recent years have seen increased votes on sustainability and diversity matters, according to Lee.

“Thus, we move to restrain these efforts just as they are gaining real traction,” Lee said.

In her Harvard speech, Peirce said she and her colleagues are being urged by some voices to standardize ESG language, but she says for now that’s too much.