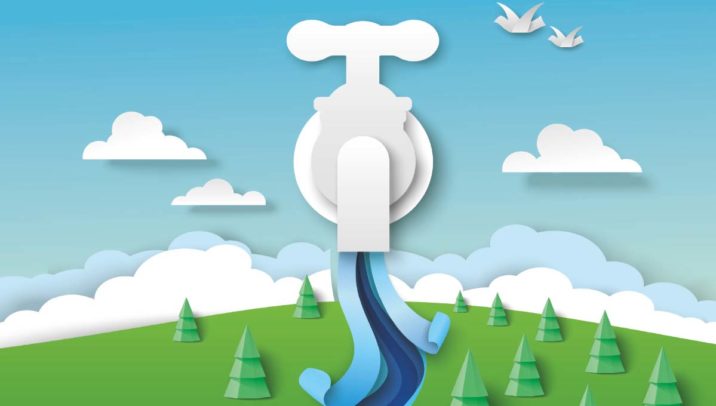 Water is an essential component of agriculture, the most vital farm input there is. Without it, crops cannot grow, and livestock would perish.

In Australia, farmers are used to extended dry periods, with the most recent drought breaking recently after several difficult years.

During what was one of the worst droughts for decades, water prices in the Murray-Darling Basin, one of Australia’s most productive food regions and home to vast swathes of irrigated farmland, peaked to levels that many had never seen before. This hurt growers who relied on purchasing temporary water each season on the spot market: the cost of water would exceed any return they could make from growing crops.

In essence, this is precisely how Australia’s water market was designed to function, with prices rising and falling based on the amount of supply in the system, with water increasingly used by those who grow the highest-value crops, usually permanent plantings and horticulture.

“We’re producing more crops from a lower amount of water”

An outcry soon followed, as it had when water prices were high during previous dry spells, fueled by a variety of media outlets. Irrigators were soon in the firing line, accused of “stealing” scarce water.

At first glance, it might feel like participating in this market, either as an irrigator who uses water or as an investor in water itself, is not compatible with ESG considerations. But this isn’t the case: those who are intimately involved in using Australia’s water, backed by institutional investment, argue that they are careful stewards of a precious resource, increasing its value and ensuring it is used in the most efficient way.

Cotton growers used to primarily assess their financial performance on a returns per hectare farmed basis, explains Argyle Capital Partners managing director Kim Morison, but it is different now. Argyle manages a range of farmland assets through its Strategic Australian Agriculture Fund and other mandates. It is also one of the largest investors in water entitlements in the Murray-Darling Basin through the Argyle Water Fund and separately managed accounts.

“What’s really altered, particularly in Australia with the scarcity of water and the abundance of land, is that irrigators look at the return per megaliter of water applied – because water is the limiting resource,” Morison says.

“Over the last 30 years, it has really been an evolution in measuring our productivity in terms of that resource. That’s the essence of our whole investment thesis – it’s why we invest in water and irrigated agriculture, with a real focus on transitioning to higher levels of productivity in terms of water use [so that we can] produce more crop per drop.”

This evolution is borne out in research conducted by Cotton Australia, the trade group for the country’s cotton industry, which accounts for a significant amount of irrigated agriculture in the Murray-Darling Basin and elsewhere.

In its most recent Sustainability Report, published in 2020, it found that the amount of water required to grow a single bale of cotton has decreased dramatically since 1992.

“From 1992 to 2019, there has been a 97 percent increase in the bales of cotton grown per megaliter of water. This equates to a 48 percent decrease in the water required per bale of cotton. In other words, Australian cotton growers are now using almost half as much water to produce a bale of cotton compared to 1992, [and] producing almost twice as much cotton from a megaliter of water,” the report said.

Significant shifts in the practice of cotton growing over the years are responsible for that change. These include using more efficient irrigation systems, a large increase in the percentage of growers maintaining field slope to avoid water runoff, increased automation and a better understanding of soil characteristics to better identify where improvements to water delivery can be made.

“We’re seeing a lot higher productivity out of orchards now using a lot less water than we used to, because we’re not wasting water like we did 10 or 15 years ago. We use exactly what the tree needs at each moment in time,” he says.

“The priority for water is the environment first – keeping rivers running – followed by town supply, stock and domestic use, with irrigators the last cab off the rank”

“We’re producing more crops from a lower amount of water. To use an example, you don’t just walk into an orchard, look at the trees and decide to water them. We have the technology to measure the performance of the trees in real time, with data collection and analysis allowing us to measure the effect of climate on them as well. That means we can work out exactly what the trees need and, for example, if the four-day forecast is for a heat event, we could put out more water in advance, so the trees aren’t impacted as much.”

This all adds up to a far more efficient use of water – which is vital when water prices generally are higher than they used to be and the consumptive pool of water available for irrigators is lower than before, thanks to a series of purchases of water to hold back for environmental purposes (to ensure the river system has minimal levels of water flow) made by the Australian government over many years.

“There is a very, very strong incentive for irrigators to use less water because it is so expensive now – they can’t afford to waste any, so that has pushed a big drive towards water efficiency. So, on every farm, particularly if you’re looking at irrigated agriculture, you are looking at an industry that is extremely water-efficient.”

The characterisation seen in some circles during the last drought, that irrigators were sucking rivers dry and preventing water from flowing to benefit the environment, is “categorically not true”, Miller says. “It’s the other way around.”

All this is to say that responsible investors need not be put off by the prospect of irrigation. It can, in fact, be a chance to act as a responsible steward of a scarce resource.

This is certainly the view of Kilter Rural, a farmland and water investor that operates two separate farming systems: one a mandate for VicSuper and the other a portfolio owned by its Australian Farmlands Fund. The latter fund invests in water entitlements and the firm runs two other separate water funds as well.

The firm’s irrigation systems have helped regenerate the soils on its properties, which is a crucial part of its investment thesis: taking underdeveloped properties in need of love then restoring them through regenerative farming practices to sustainably produce profitable food while also having a net environmental benefit.

To take one example, the firm knew that some of the soils on its VicSuper-owned farms had high salinity, so it planted lucerne, a salt-tolerant cultivar, which draws the salty water out before the crop is carted away in the form of fodder. It then planted organic crops under irrigation, as the value of these are higher than conventional crops.

“We’re using automated systems with moisture probes at 90cm depth, so you can monitor the water profile of the soil right through the summer. If we know where the moisture is and what the temperature is, we can keep that topped up so the plant doesn’t suffer at all – and generally we use a third less water in these sub-surface systems than we would with a gravity system,” explains Michael Neville, farmland and ecosystems general manager at Kilter Rural.

Growing organic crops using sub-surface irrigation is also particularly challenging, Neville says, because you cannot feed herbicides and pesticides through the irrigation tape to prolong its life. But Kilter Rural has proven that is possible, producing a large and profitable organic crop – the only firm in Australia that has done so on that scale.

“If you think about regenerative agriculture, you are just trying to have a healthy plant grown in healthy soils, just like you would in your garden. The challenge is to work out how to do that on a big scale,” he says.

“We just use water efficiently and put it to its best use, through those high-value crops. The agricultural systems in general have come a long way. Everybody realises there is not the same amount of water around and a lot of people are doing things more efficiently now.

“When you have a season like we’ve had in the last year or two with lots of rain, everybody can do more with the water that’s available, but there will come a time when that’s not the case and you will have to have systems that make it work for you, that are reliable and efficient.”

So, despite the negatives that often stick to irrigators during dry seasons in Australia, it’s clear that regenerative agriculture and responsible investment are compatible with irrigation when care is taken over the use of water.

Water itself has proven to be an attractive asset class for investors since the Murray-Darling Basin water markets were opened up and land titles were separated from ownership of water in Australia.

Argyle Capital Partners managing director Kim Morison argues that this can also fit with a responsible investment outlook, contrary to some of the negative perceptions among the general public about foreign investors holding water without owning land, or so-called ‘water barons,’ who allegedly hoard the resource to drive up the prices – a claim that was thoroughly debunked by the Australian Competition and Consumer Commission in a recent wide-ranging report.

“Through our portfolio of water entitlements, we are able to initiate forward sales of water to growers, giving them price certainty rather than forcing them to buy water on the spot where it could become prohibitively expensive,” Morison says.

“This allows irrigators to better manage their risks – by knowing they have secured their water supply at a certain cost, they can then also sell a portion of their commodity production forward if they wish.

“For example, right now cotton prices are at record highs in Australian dollar terms. Growers are buying water forward from us to guarantee supply for a crop to be planted in October 2022 for delivery in June 2023, and simultaneously selling cotton forward for 2022-23 delivery at A$650 per bale.”

This provides more financial security for those growers, allowing them to invest in more efficient methods and ensuring a more sustainable food production system.