New Private Markets
Home News & Analysis Fundraising Linking carried interest to impact: The ‘who?’ and the ‘why?’

The news that former EQT executive Jan Ståhlberg’s maiden €900 million vehicle under the Trill Impact brand will forfeit 10 percent of its carried interest if the fund does not meet certain impact targets has certainly got the industry talking.

Of course, Trill is not the only GP implementing tying its carried interest to ESG or impact metrics, but it is one of the few examples of a large fund doing so. EV Private Equity is putting in place a similar scheme for its sixth fund. Capza will also forfeit some carried interest if it fails to reach its target of implementing ESG schemes for the portfolio companies in its sixth private debt fund. And a handful of venture capital firms, including Norrsken and Revent, are also tying carry to impact. Swen Capital Partners is linking 50 percent of the carry on an ocean-focused impact fund it’s currently raising.

“We’ve been talking about impact carry for a number of years now,” says Ali Floyd, senior vice president at Campbell Lutyens. “Yet most of those doing this were fairly established, specialist impact-focused GPs that operated predominantly in the lower mid-market and that tended to attract capital from mainly domestic investors. We’ve now seen an undeniably significant entrant to the market setting a precedent for other new players.”

“I see a time when LPs will be looking for an ESG hurdle rate as well as a financial one because it demonstrates a commitment to positive change.”

So, is this the beginning of a new trend in impact investing? Some believe it may be, with emerging managers leading the way. “New managers are starting with a clean sheet of paper,” says David Gowenlock, a member of the fund advisory team at ClearlySo. “They tend to be smaller and partner-led with small teams and so they can design their offerings with more freedom than, say, a more established and larger firm where it would take longer to get approval from all partners and staff, and they may not get buy-in from the whole team.”

The more established managers newly implementing these arrangements believe it’s a natural evolution, as Capza CEO Laurent Bénard explains. “We’ve been working on ESG since 2015, but it has become increasingly evident how urgent the need is for improvement in areas such as climate change and social equality,” he says. “This is a long-term necessity and to make it really work and to ensure effort is really directed towards improvement, we believe linking carry to that is important – it strengthens your purpose. I see a time when LPs will be looking for an ESG hurdle rate as well as a financial one because it demonstrates a commitment to positive change.”

An influential proponent of this approach is the European Investment Fund (EIF), which manages impact funds of funds targeting both climate and social impact funds, predominantly in the venture space. When raising its first vehicle in 2013, the organisation created “a framework to quantify, measure and verify impact to be used as an alignment of interest tool, as opposed to a reporting tool,” explains Cyril Gouiffès, head of social impact investments at the EIF. 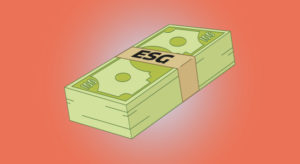 Using this framework, firms calculate an impact multiple for each portfolio company that is weighted by investment size; this feeds into a single impact multiple for the fund. If a fund reaches its hurdle rate, the level of carried interest the managers then receive is dependent on this multiple (which is equivalent to its impact performance). However, there is flexibility built into agreements to ensure all LPs are comfortable with the arrangement and corresponding financial incentives. “We devised this approach because we believe there has to be a positive correlation between financial and impact performance,” says Gouiffès.

The EIF is applying this model to its impact venture funds currently, but there may be further moves in this direction elsewhere in its portfolio. “We are looking to implement our impact methodology in our private equity activity,” says Adelaide Cracco, head of climate and environmental impact at the EIF. “It may be easier to achieve this in private equity because we’re dealing with larger, consolidated companies with established revenue-generating businesses and as such, know where to focus their efforts and what impact they can achieve.”

“Not all are on board, because it’s a relatively recent phenomenon, but we are seeing a few very influential LPs that want this to happen.”

While the EIF is, by its nature, an impact investor itself – its mission is to foster risk financing, entrepreneurship and innovation in Europe – other investors are clearly encouraging this approach. “LPs are really important in shaping this dynamic,” says Floyd. “Not all are on board, because it’s a relatively recent phenomenon, but we are seeing a few very influential LPs that want this to happen.”

UBS is one investor supportive of the idea. “I sat on the advisory board for the IFC’s Operating Principles for Impact Management,” says Andrew Lee, head of sustainable and impact investing at UBS. “Principle two states that managers should consider aligning compensation to the realisation of impact. It’s an evolving field, but those aiming to deliver measurable impact should align incentives – after all, if impact is being measured, you should be able to tie it to carry.”

Read the second instalment of this deep dive: ‘Linking carried interest to impact: The ‘how?’ and ‘what next?’